My best friend and I have found ourselves at Cote Brasserie in Exeter quite a few times. It’s a bit of a guilty pleasure for us, and linked to some good memories of evenings spent chatting and drinking too much wine. However… we have always opted for the A La Carte menu and, until last week, had never tried the ‘set’ cheaper offering. On this menu, two courses are £11.50 and three are £13.50 (as long as you eat between 12pm and 7pm). It definitely seemed like good value, so we thought we’d give it a try before heading out to see a film that evening.

Cote are great for gluten-free and they always have quite a few options to choose from. There’s nothing worse than being told what you’re going to have because it’s the only thing on the menu that is suitable. Anyway, we had quite high hopes based on what we had eaten at the restaurant before. 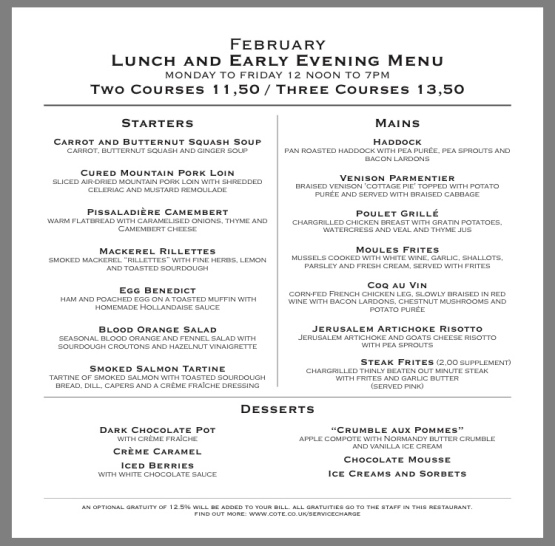 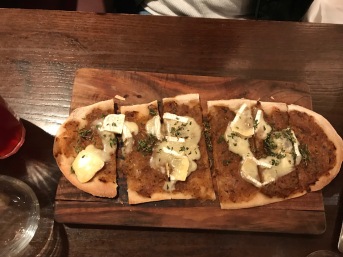 Dean opted for a warm flatbread with caramelised onion, camembert and thyme. Obviously this was not gluten free so I didn’t try it myself. Dean thought it was okay but wasn’t overly impressed – the camembert was a little thin and dried out and there was too much fresh thyme. I opted for the Smoked Salmon Tartine, described as coming with capers, dill and a creme fraiche dressing. Unfortunately, I was a little disappointed with this. It felt more like something i’d knock up quickly for breakfast. As you can see from the picture where my ‘gluten free’ flag was stuck in – my toast had been burnt. There was no creme fraiche dressing as promised on the menu, and the salad had no dressing. This is the kind of thing that really annoys me, a little bit of effort with a dressed salad, maybe some toast that had been charred with some olive oil on the side, and that dressing to bring it all together – I think I could have really enjoyed this starter.

For our main courses, Dean and I opted for the same and both chose the Poulet Grille. This was described as chargrilled chicken breast with gratin potatoes, watercress and veal and thyme jus.

I have to say, neither of us had anything to complain about with this. It definitely didn’t have the finesse of the mains we had ordered in the past from the A La Carte menu. But, the potatoes were good, the chicken was succulent (although could have been chargrilled a bit better – I like to see the ‘char’ lines, ours looked a little pale), and the jus was flavoursome. There was nothing on the dessert menu that tempted either of us, so we left it at that.

Overall, I don’t think either of us would return to Cote for the set menu. I would rather have a main course from the A La Carte menu for around the same price, than two (more mediocre) courses from the set menu. However, I still think it was pretty good value, the food came quickly and the staff were friendly and efficient as always.